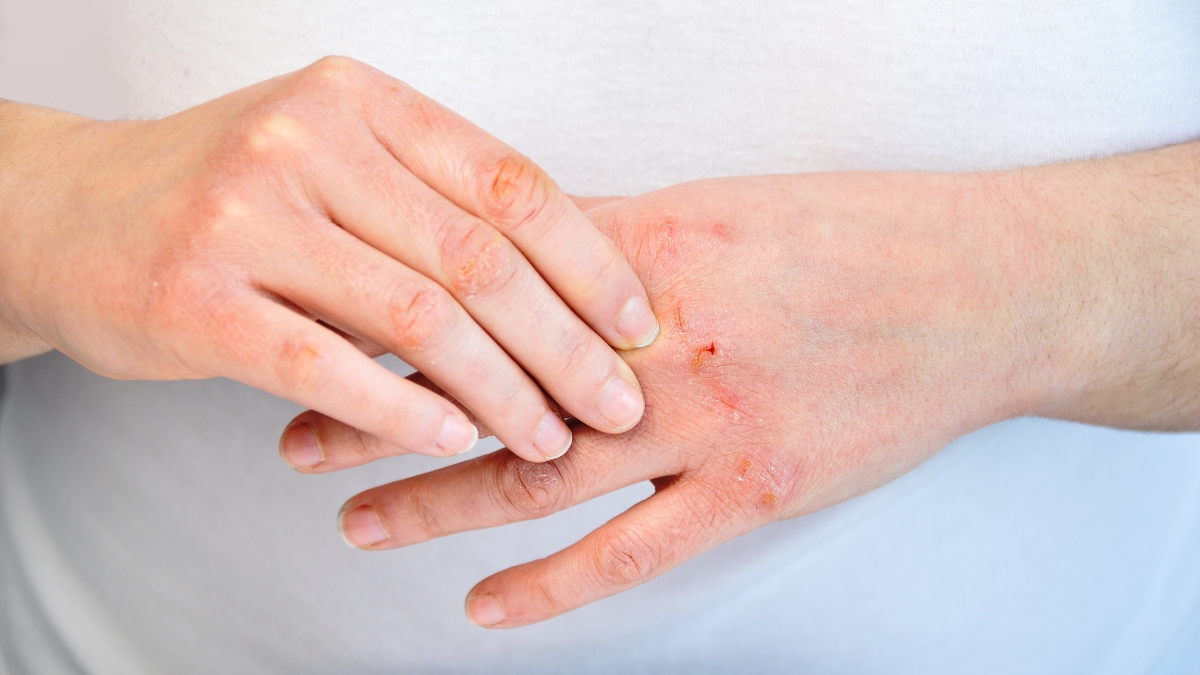 For decades, professional chef Cat Dillon suffered from painful, redness, and unsightly skin flare-ups. Her eczema seemed unrelenting, and she didn’t know why her skin was always so inflamed. But when she used her knowledge of nutrition to finally identify the cause in her diet, she healed herself for good!

Catching a glimpse of herself in the mirror at the gym, Cat Dillon gasped. Her whole body — her shoulders, neck, back, torso, even the folds of her knees and elbows — were covered with red, scaly patches.

For as long as she could remember, Cat suffered with atopic dermatitis, or eczema, a condition that causes an itchy, inflamed rash, sometimes erupting into oozing sores. Over the years, the professional chef and nutritionist tried dozens of ineffective over-the-counter remedies and visited numerous dermatologists. All had prescribed topical steroid creams, but because this medicine thins the skin, it made Cat’s irritation even worse.

Cat’s life became a never-ending cycle of embarrassing, painful outbreaks that left her frustrated and depressed. “Will I ever feel relief?” she despaired.

A Diet to Treat Eczema

Finally, Cat had had enough and set out to find her own solution. Given her nutrition background, she knew the impact food can have on the body, and she began to examine her diet in relation to her eczema flareups. One thing immediately came to mind: Some mornings, she’d stop for an oat raspberry muffin. Shortly after, her eczema would flare up. The same thing would happen after a dinner out, when she’d feast on the warm bread.

Cat hated to acknowledge it, but realized that gluten could be the problem. Gluten, she knew, is made up of a group of proteins found in wheat, rye and barley that can be difficult for the gut to process, triggering all kinds of immune reactions, including skin issues.

Curious, Cat decided to try to slowly eliminate gluten from her diet. She started by limiting herself to one piece of bread at restaurants and replacing her bakery muffin with one she made herself, substituting the wheat flour with coconut flour.

Making those simple changes, Cat saw a dramatic improvement in her eczema, so she decided to take the plunge and go completely gluten-free. To her surprise, it wasn’t as hard as she’d thought. Everywhere she looked, she saw a new opportunity for an easy swap, replacing gluten-based breads for counterparts made with coconut, cassava, and flax meal. She also opted for wild rice and whole quinoa in place of wheat pastas.

A Cure in Just Six Months

As her eczema continued to improve, Cat also focused on eating more vegetables, good fats, protein (like wild-caught fish and pasture-raised poultry and beef), and small portions of fiber-rich foods (like sweet potatoes and lentils) to keep her full. To her delight, her skin irritation and inflammation died down more with each passing day. And after only six months, all evidence of her eczema was gone. No redness, no scaling and no more pain or embarrassment.

“I feel free — free to enjoy myself, free to show my skin, and free to feel good in my skin. I am no longer depressed or stressed,” beams the Encinitas, California, 56-year-old. “I have a whole new lease on life!”

This article originally appeared in our print magazine, Woman’s World.